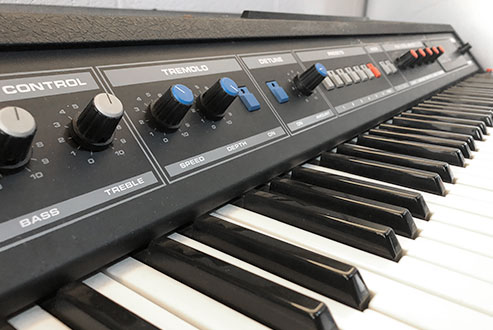 You often find threads in forums asking about the EP type sound in the Radiohead track ‘Everything in its right place’.
I’ve also always loved this sound, I think a lot of people do, it’s a bit of a classic.

END_OF_DOCUMENT_TOKEN_TO_BE_REPLACED

The general consensus seems to be that it’s a Crumar DP-50 – a very rare Italian electric piano analogue synth from the early 80s. A friend who knows Jonny Greenwood tells me he is always looking for spare DP50s, so that seems to clinch it. But there is the small matter of the wide stereo image, and the very clicky sound that can also be heard in the track. Is that part of the EP sound? or a layer?

We couldn’t find a DP-50  – they are like rocking horse shit – but we did find its’ bigger brother, the DP-80. As far as we can tell, it’s the same thing with a bigger keyboard. But information is so scarce on these units.. it’s like they hardly existed. 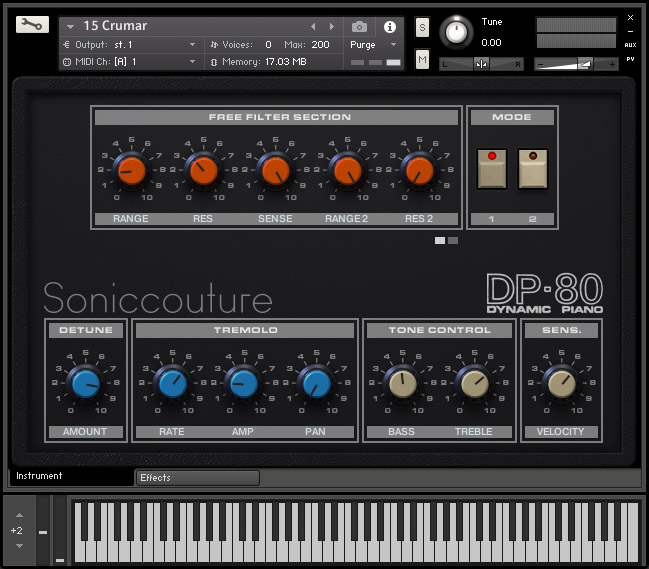 After lugging the 40kg brute into my studio, making it sound just like Radiohead was not the easiest thing. It really doesn’t make that attacky click. But the filters are really cool, and when you sweep them, it really is just like the part in ‘Everything’ where the filters all open up.

So, I followed the internet wisdom and added another synth – Minitmoog, also in the Attic2, for the clicky attack. With some fine tuning of envelopes and resonance that worked pretty well. But EP part still doesn’t sound quite right – I realised that the whole Radiohead track is tuned down from a conventional 440hz to 437hz – so tuning like the track it certainly gets it closer.

There is also a layered single drone note on the Radiohead track. It kind of sounds like it’s part of the EP sound, but them you realise it’s not, it’s just floating there behind it, glueing it together. It’s a fairly generic sounding filtered sawtooth type synth wave, so I use the ARP omni2, which sounds close.

But the EP still does not sound as ..flat and sustained as the original. So, I think, lets try throwing compression at it ..also maybe that could make a bit more click on the attack. So, I end up with an NI VC160, running into an SSL X-Comp into a UAD Distressor, which seems to flatten and fatten in good measure.

Finally it seems that the harmonics are a little more pronounced and forward on the Radiohead track, so I add SoundToys Decapitator and this embiggens the sound in just the right direction. 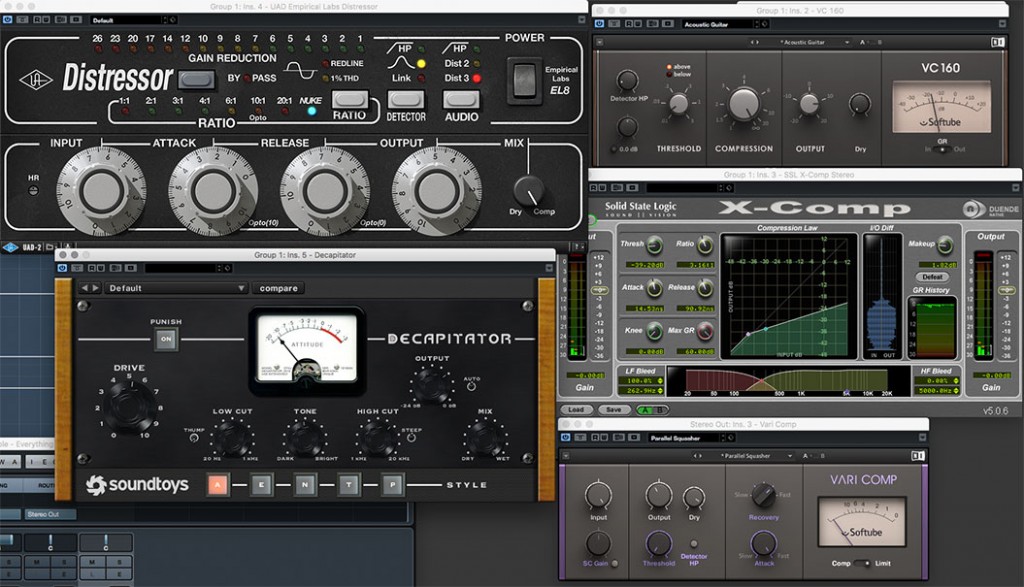 Compressors used on the EP sound

That’s how we ended up with the sound you hear in the demo video. It’s not exactly 100% the same, but I think it’s a close as I can get without an exact list of everything used in the Radiohead track. I appreciate that extra production is needed over and above what is possible in The Attic, but it seems clear that Radiohead and Nigel Godrich must have done quite a bit of processing to the ingredients of the original track too! 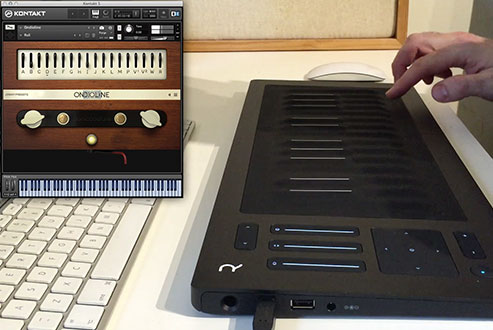 Roli sent us a Seaboard RISE to try out; here’s James noodling somewhat poorly with Ondioline.

END_OF_DOCUMENT_TOKEN_TO_BE_REPLACED

The Seaboard Rise is a very effective partner for the Ondioline instrument – I can’t think of any other controller which enables such a realistic emulation of the original units lateral vibrato keyboard. The Seaboard is much more flexible than that, though – the Ondioline keyboard could move side to side, but that was all – with the Seaboard completely fluid slides (in all directions) are possible, and the pressure sensitivity is also possible, although it takes some practice to play softly enough to be able to use it well.

The Seaboard is pretty easy to get used to, but you can imagine there is scope to become a real virtuoso with it. 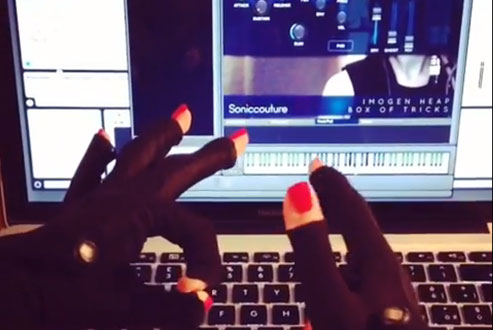 Valentina Morandini sent us these videos of her working with Box Of Tricks and a pair of the MiMu Gloves, co-developed by Imogen Heap.

END_OF_DOCUMENT_TOKEN_TO_BE_REPLACED

“In the vocal pad video I am playing 3 different chords making 3 different postures (1 finger point+claws cat+ok) with my left hand and at the end I added a delay effect to the last vocal chord, moving the ring flex sensor with my right hand.” 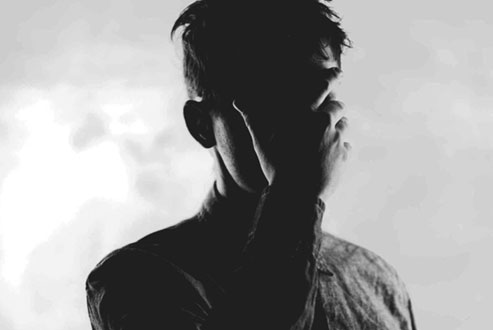 Not a combination that I’d have predicted might work musically, or even one that I could ever have conceived of.

But I guess that’s the world we live in today. Where any old maverick NY-based producer can collaborate with a crazy kiwi siren using nothing more than some early-renaissance skin drums and a Korean percussion ensemble.

END_OF_DOCUMENT_TOKEN_TO_BE_REPLACED

Ryan Lott / Son Lux emailed me with a niggly NI Service Center issue which we won’t go into here. I googled him, and found the Lorde track, Easy (Switch Screens)

It caught my ear because of its stripped down, angular yet tribal beat. I said to Ryan I liked it, and he told me it was done with Soniccouture’s Conservatoire Collection and Samulnori Perucssion kontakt instruments.

Ryan says: ” Lorde tracked her vocals over the instrumental of the original version of the song Easy, which is on my record Lanterns. Then I adapted the song in response, and I knew it needed to be meaner. Her attitude on it was incredible. She did almost all her own vocal production, creating double and triple layers that were pitched-down and crazy-sounding. I was so inspired by it, I did most of the new version in a single sitting in the tour van between Berlin and Köln back in January. It was actually between the first and second shows ever (I didn’t have a band until recently)! I love the dusty, primitive and simple quality of the percussion in the Conservatoire Collection, so I started there. Those sounds have a lot in common sonically with the skins in the Samulnori stuff. I hacked into Kontakt and messed a bit with the tuning of the individual drums get the right tonal quality. On one of the drums, I did some extreme pitch manipulation to double the sub kick in special moments.”

Available as a single track on itunes

Recently, the sound of our Array Mbira instrument caught my ear. I had followed a link from Twitter to the Bandcamp page of C418, otherwise known as Daniel Rosenfeld. Playing one of Daniels tracks, Surface Pension, I loved the strong, individual use of the Mbira in the intro.

END_OF_DOCUMENT_TOKEN_TO_BE_REPLACED

And the way the Mbira drops in on Certitudes is fantastic :

In fact, listening to the tracks it seemed as though Array Mbira is one of the signature sounds of Minecraft, which is fantastic. So I read a little background on him, and was intrigued to discover that he had got his break writing music for a computer game when he was only 20 years old. Now he has thousands of followers and fans of his characterful, whimsical music. 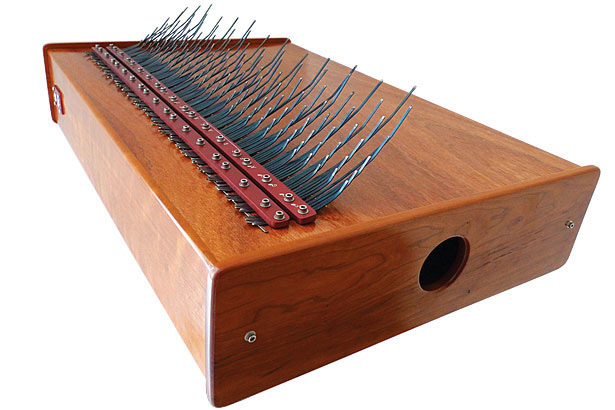 So, I got in touch with Daniel to ask him how he got started in music..

I started out making music for myself and sharing whatever I created with close friends. Markus Persson, the original creator of Minecraft was one of those friends. When he asked me to create music for his game, Minecraft was merely a tech demo that had nothing but a flat surface you could place blocks upon. As I kinda had nothing better to do, I agreed on helping him out creating music, and sound. So essentially I created every song and almost every little sound effect heard in the game. And I still do, actually. Turns out the game is really popular and sells super well.

Where did you first hear about the Array Mbira virtual instrument?

I kinda learned about Soniccouture in general after I was allowed to play a pan drum for a short while. And there was really nothing about actual hangs in the sampling market, except for Soniccoutures library. I still use the hang library a lot. Mostly in the background as a kind of flavor to the overall sound.

After playing around with the pan library, I got into more and more of the instruments Soniccouture makes, and they’re really brilliant unique stuff. I absolutely love it so so much, haha. Like, the bowed piano, gamelan, music box and the crazy speak and spell library. I pretty much use a little bit of everything in all of my productions.

Oh, and Geosonics is gonna be super useful for some future Minecraft music, and I will use it a lot there.

Would you say Array Mbira is one of the signature sounds of Minecraft ? Could you point us at some of your favourite Array Mbira tracks?

I used the Array Mbira library very prominently for the soundtrack to the documentary about Minecraft. Something about the quality of the instrument kind of made me want to stretch its soundscape over the entire thing. Maybe to make it feel connected, of sorts. So no, I don’t use the Mbira as part of my individual sound, but it sounded so good to me that I decided to write an entire 90 minute soundtrack having it as a backing instrument.

…I think the stuff you make really makes my life easier, since I love to write unique music.

Another track which prominently features the mbira :
Close Close
Page 1 of 212Next