A few years ago (checks email : 2010, in fact), Madonna/Bjørk/Frou Frou/everyone producer Guy Sigsworth got in touch to tell us how useful he finds a certain loop from our Tremors collection :

END_OF_DOCUMENT_TOKEN_TO_BE_REPLACED

Hey James. I’m sure you’ll remember this loop from your “Tremors”
collection: 140-shambiling-hats

So funny. It sounds so simple – like it’s just filtered white noise – but it’s got this peculiar character. I guess it’s really easy to fit behind just about anything and get an instant feeling of atmosphere. It’s like the modern, digital version of stylus surface noise. I may start trying to program my own versions of it, just for variety’s sake.

Well, as you may know, the album, The Minutes was recently released on Cooking Vinyl, and it was great to finally hear the track in question, Remind Yourself :

Guy also tells us that the harpsichord type sound in the song intro is in fact Soniccouture’s Plucked Piano instrument from Xtended Piano :

“It’s the thing most people think is a harpsichord, playing right across the song. It’s most audible above the fray towards the end of the track. Actually, the French harpsichord gets used quite a lot – often in places where people might not realise. It’s doubling all the big synth riffs in “Apple Kisses”, for instance. I often use Pianoteq’s harpsichords too, but they only do a single stop sound. If I want that big sound, of the 8′ and 4′ coupled together, the SC French harpsichord is the one. It’s huge.”

Guy is a long time Soniccouture user and supporter – in fact he was one of the people who first suggested we create an Ondes Martenot instrument, which we eventually did. He told us :

1. They’re really interesting, unusual colours. You keep finding exotic instruments and unfamiliar timbres which have been largely overlooked by other sample library makers.

2. You put them together into sensible, practical programmes; so you can just sit and compose with them; at a keyboard, and in C major if necessary. Obviously there’s a place for great atonal noise collections too. But when I buy an SC instrument, I’m not worried it won’t be able to adapt to play something tonal, melodic or chordal in an existing song arrangement, if that’s what I need it to do. Of course it’s more fun to compose something new, specifically for the SC sounds. But sometimes it has to fit into an existing project. And that’s never a problem.

2. They’re in tune. Nothing makes me more angry than buying an expensive sample library only to discover it’s going to sound terrible if you MIDI it up with, say, an FM8 playing at A440 in equal temperament. I never understand library makers who excuse bad intonation or a non-440 pitch centre on the basis that it’s more “real” or “vibey”. It’s really easy to make a 440 ET instrument play at 415 in Pythagorean using the Kontakt factory scripts. It’s a nightmare trying to do this in reverse, especially when you’re on a deadline to finish a song.

3. They’re reasonably consistent across the instrument. I don’t expect a sample collection to have the unwavering timbral uniformity of a digital synth. But it’s also annoying to find, say, all the middle c samples sounding kind of dead and broken. I’ve never had to adjust the key splits on any SC instrument. I can’t say that for other libraries I’ve bought.

By the way. I LOVE your Kontakt script collection. On “A Place To Stay” there’s an organ sample being detuned using that script of yours (can’t remember the name) that does Penderecki-style slow glissandos. I think you should make another script collection!”

And the magic noise loop ? It lives on :

” I’ve used that Tremors top loop again on a piece for Eric Whitacre’s Virtual Choir which is coming out this month. It’s only in the quiet bits. You can hear it clearly in the long form version, but it’s largely left out of the “radio edit” I’m afraid. It’ll be on the internet soon.”

Mogwai: The Sounds and The Process

Mogwai: The Sounds and The Process

Mogwai have recently put the finishing touches to their seventh studio album, ‘Hardcore will never die, but you will ‘ – which will be released on 14th February 2011 (St.Valentines day – nothing says “I love you” like Post-Rock).

Curious about their working methods and instrumentation, we chatted with Barry Burns from the band about what goes into their creative production process,

END_OF_DOCUMENT_TOKEN_TO_BE_REPLACED 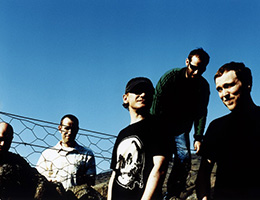 Mogwai have recently put the finishing touches to their seventh studio album, ‘Hardcore will never die, but you will ‘ – which will be released on 14th February 2011 (St.Valentines day – nothing says “I love you” like Post-Rock).

Curious about their working methods and instrumentation, we chatted with Barry Burns from the band about what goes into their creative production process, from a sonic point of view.

Can you tell us how a Mogwai track gets underway? Do the band all generate ideas separately then come together to develop them, or do they develop more in the studio?

“We have 4 writers in the band and we all sit at home and try to come up with something that we can all work on then send to each other over the lovely internet before meeting to rehearse (for many hours) then we get into the studio and bash things into shape a little more. I think it develops at different stages in different ways for different songs so it’s impossible to say we have a set way of realising ideas, music is too abstract and fickle for that.”

Mogwais’ music is abstract and textural – do sounds and timbres lead the creation process or is the starting point always musical?

“Personally I think a great starting point are the sounds that I find. I rarely have a set melody in my head to begin a song until i find a sound i like and then it’s just trying things out on a keyboard or sometimes a guitar with some effects pedals.”

You mentioned that Bowed Piano (from the Xtended Piano collection) features on the new album?

“We’ve used a lot of piano on most of our albums before now and often we’d plucked the strings or hit them with glockenspiel beaters but I had in the past wondered about what it would sound like to bow notes and chords on the piano. Our producer Paul Savage told me about the Bowed Piano at the beginning of the recording of our new record and we heard some samples of it. We are big fans of long drones so obviously the bowed piano fits in perfectly with our style of music. We mostly used it for the drones on a few tracks, hopefully it’ll be clear enough to hear which ones when the songs are released next year.”

Do you use the Bowed Piano instruments’ synthesis functions to shape and integrate the sounds into the mix, or do you prefer to preserve the original timbre?

“A bit of both. I like it “as-is” but I also liked the way I could use the filter to take away the high end and scratchiness. The controls were very useful and it makes your sound different to anyone else’s.”

Novachord also features on the new album – could you expand a little on how it was used, and what aspects of its sonic character appealed to the band?

“It was weird with Novachord ; I hadn’t heard of the original being such a luddite. Usually, I have to spend a little time, sometimes a minute or two, other times far too long to try and get a sound that fits a song but this actually has loads of great presets without going into “preset-hell”……the rest of the band tend not to like me flicking through too many…..so I get less daggers. I’m really into Italo-Disco and film music from Dario Argento films and this sounded like a lot of those soundtracks.”

The Novachord – ancient and venerable synthesiser

What pieces of gear are creative essentials to Mogwai and you personally?

“Well, my little studio has a Dave Smith Polyevolver, Juno 60, Logic with Kontakt and a fairly modest sample library including all my SonicCouture plug-ins, a guitar with Guitar Rig (which I put so many of my keyboard stuff through) and my Midi Controller. I’ve never been a great programmer of all things MIDI so it’s nice when I can just turn something on and start playing. Looking forward to the Xtended Piano for the next album. For live concerts I have my Muse Receptors which I use Kontakt on and loads of other plug-ins…..one of my favourite’s being Applied Acoustics Ultra Analog.”

Which other Soniccouture products have found their way into your work and in what way were they used? 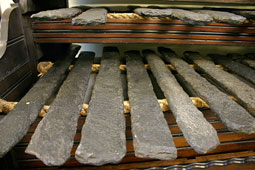 “We used the Skiddaw Stones on one song; It’s been used as an ambient effect, i think through a spring reverb from the 70’s. I think we used the bowed gamelan for a similar effect. It’s the little noises in the background that can make a song, sometimes more than the main melody or chords. That’s always been something extremely important to us and those sounds should never be underestimated.

We also used the free Music Boxes which are just amazing. That was a great idea to sample them. We actually had Mogwai music boxes made for us in China once that played one of our melodies. That’s how much we like them.”